Write short notes on the following;
1: HTTP
2: FTP
3: PACKET
4: NIC
5: MAC
6: IP ADDRESSING
7: DNS
8: DHCP
1: HTTP(Hyper text transport protocol)
This refers to an application protocol for distributed, collaborative, hypermedia information systems that allows users to communicate data on the world wide web.
HTTP was invented alongside HTML to create the first interactive, text-based web browser the original world wide web.Today the protocol remains one of the primary means of using the internet.
How the HTTP works
As arequest -response protocol HTTP gives users with web resources such as HTML  files by transmitting hypertext messages between clients and servers. HTTP clients generally use transmission control protocol (TCP) connections to communicate .
Below is the structure of the HTTP
2: FTP (File transfer protocol)
This is a  computer that provides file storage and access services on the internet.
They provide services in accordance with the FTP protocol. FTP, the file transfer protocol is a set of standard protocols for file transfer on the network using the client /server model. FTP is a protocol specifically used to transfer files.
FTP is a client /server system. Users use a client that supports the FTP  protocol to connect to a server program on a remote host.The user issues a command on the client and the remote server host server executes the command issued by the user after receiving the command and returns the execution result to the client.
How the FTP works .
FTP is based on the TCP protocol services which is a file transfer protocol on the internet.
By default,  two ports 20 and 21 are used,  a data port for  file transfer between the client and the server data flow.
Port 21 is a command used to transmit control flow and accept related FTP commands and parameters issued by the client.
Below is the structure of FTP
3: PACKETS
This is a small segment of a larger message .
Data sent over computer networks such as the internet is divided into packets. These
Packets are then recombined by the computer of device that receives them.
A packet consists of control information  and use data, the latter is also known as the payload control information provides data for delivering the payload.
Typically, control information is found in packets headers and trailers.
How Packets work
In packet switching the bandwidth of the transmission medium is shared between multiple communication session,  in contrast to circuit switching ,  in which circuits are reallocated for the duration of one session and data is typically transmitted as a continuous bit stream.
Structure of a packet 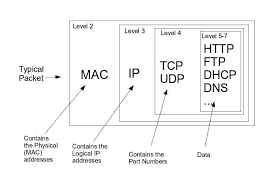 4: NIC(Network Interface Case)
A network interface card (NIC) is a hardware component, typically a circuit board or chip, which is installed on a computer so that it can connect to a network. ... Each card represents a device and can prepare, transmit and control the flow of data on the network.
5: MAC (Medium access control)
A control is a sublayer of data link layer of the open system interconnections(OSI) reference model for data transmission.
The major purpose of MAC is to provide an addressing mechanism and channel access so that each node available on a network can communicate with other nodes available on the same or other networks and sometimes it is referred ti as a MAC layer.
6: IP ADDRESSING
(Internet protocol ), This refers to an identifying number that is associated with a specific computer or computer network when connected to the internet,  the IP address allows the computers to send and receive information.
How the IP address works
It allows computers to send and receive data over the internet .Most IP addresses are purely numerical,  but as internet usage grows letters have been added to some address.
There are different types of IP address and these are; public, private, static,  and dynamic.
1:Public and private are indicative being used inside a network while the public is used outside of a network.
2:Static and dynamic indicates permanency.
Below is the IP address structure
IP addresses are displayed as a set of four digits, the default address maybe 192.158.1.38.Each number of  the sets may ranges from 0.0.0.0 to 255.255.255.255.
7: DNS (Domain Name System)
This is the phonebook of the internet. Humans access  information online through domain names,  like nytimes.com or espn.com web browsers interact through internet protocol (IP) addresses.
DNS translates domain names to IP addresses so browsers can load internet resources .
Each device connected to the internet has a unique IP address which other machines uses to find the device.
How DNS work
The process by of DNS resolution involves  converting a hostname ( such as www.example.com) into a computer -friendly IP address (such as 192.168.1.1)
8: DHCP (dynamic host configuration protocol)
This is a network server that automatically provides and assigns IP addresses, default gateways and other network parameters to client devices.It relies on the standard protocol known as Dynamic Host  configuration protocol or DHCP to respond to broadcast queries by clients.
How the DHCP works
A DHCP server automatically sends the required network parameters for clients to properly communicate on the network administrator has to manually setup every client that joins the network, which can be cumbersome especially in large networks.
DHCP servers usually assign each client with a unique dynamic IP address which changes when the clients lase for that IP address has expired.