P7 SST & RE END OF TERM ONE MARKING GUIDE

3. It helps to control soil erosion./It helps in rain formation./Trees act as wind brakes./Trees are sources of food like fruits./Trees help to reduce on global warming by consuming carbondioxide.

4. By using names of places./By using the map of the school./ By using features in a school.

6. The interior is on a higher altitude than the seas and oceans.

8. It is used for water purification./It is a source of calcium.

9. Through exporting processed goods instead of raw materials.

10. The temperatures become high twice when the sun is overhead the Tropic of Capricorn

13. To reduce on the rate of transpiration.

15. To prevent other colonial powers from accessing Uganda's resources.

16. It crossed by by both the Prime Meridian and the Equator./It has the largest number of countries amongst all continents.

23. By deploying traffic policemen on the roads./ by regulating the number of passengers carried by every vehicle./By putting humps on roads.

24. They are both rift valley lakes. They were both formed as a result of faulting.

26. The Eastern part of the continent is highly mountainous than the Western Part.

33. It generates income from the taxes paid by land locked countries./It is source of employment to the people of Kenya.

(d) They are so deep./Salty water is harmful to the inner body organs.

(b) They were blown by monsoon winds.

(b) It helps to check the standard of goods before they are put on market.

(c) It has constructed roads./It has built markets in different parts of the country./It has provided financial support to the citizens.

(b) To restore peace and order in the community.

(b) It is used as medicine./It acts as food./It is a source of wood fuel.

(c) They provide us with water for irrigation./ They help in generation of hydro electric power./They are used for transport.

(b) They used traditional leaders to encourage cash crop growing among Africans./They used them to help them fight rebellions.

(b) It receives rainfall throughout the year.

51. Either: (a) They spoke in different tongues./They started performing miracles./Flames of fire appeared on top of their heads.

(b) They heard the apostles speaking in different languages.

(c) They were in the upper room of the temple.

Or: (a) He united people under one leadership./He stopped tribal wars in Madina./He built a mosque there./He spread Islam.

(b) He was a symbol of unity amongst them./He accepted their invitation to migrate to their area.

(c) It reduces conflicts over faith in the family./It makes it easy for parents to raise their children in faith.

(c) It reduces conflicts over faith in the family./It makes it easy for parents to raise their children in faith.

(b) It is because their Lord Jesus died and resurrected from the dead.

(c) It causes sadness among Christians./It separates them from their relatives./It leads to loss of their loved ones.

Or: (a) They are disbelievers and they are afraid of going to hell.

(b) It is one of the pillars of faith./They believe that it

(c) It causes sadness among Christians./It separates them from their relatives./It leads to loss of their loved ones.

(c) The tree of knowledge of good and evil.

(d) He realised that he was naked.

(b) By feeding the needy./By giving clothes to the naked./By giving money to the poor.

Send Me an SMS 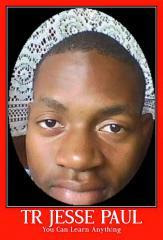 Hello! It is I, Teacher Jesse Paul. I warmly welcome you to my educational site. Let me hope that you will enjoy all the services with which I shall provide you. Just in case you come across any mistake on this website, please don't hesitate to contact me. You can either give me a phone call or send me an SMS. Thanks in advance.